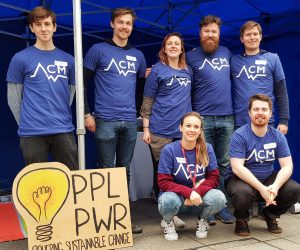 In 2019 the Imperial Festival is going to be even bigger as Imperial College joins forces with twenty of its neighbours across South Kensington to create a unique festival fusing art, science, technology and curiosity. The Great Exhibition Road Festival will take place on 29th and 30th June 2019 and the CDT-ACM will be joining in and organising events and activities inspired by our CDT’s research. To find out more about the Great Exhibition Road Festival click here

First year students Troy Dion and Emily Hofmann helped to organise and present at “Physics, Nanoscience and Computerscience Taster Day 2017” on Wednesday 29 March. 37 students (aged 13-15) from two London schools visited UCL, where they were given a short lecture, taken on a tour of the UCL Physics labs and the London Centre for Nanotechnology. After lunch activities and demonstrations were organised to give students a taster of the types of experiments that are carried out by nano- and computer scientists.

Emily showed students round the STM lab (Scanning Tunnelling Microscopy). She also helped to run an Android App Development activity. Students were given an almost completed game designed for Android, where three dice are rolled and points are given according to the outcome, and they were taught about programming apps so that they could finish the programming to make their own personalised app.

Troy used a programme developed by UCL called the engduino which is designed to teach schoolchildren basic programming. Troy demonstrated how you can measure, for example, light levels using the sensors on the engduino. The results were then plotted on a computer and then using the engduino students were able to set a thermistor which caused LEDs to change colour in response to the light being measured. He also organised a memory game using an accelerometer on the engduino where the students tilted the device in the same direction as shown on the LEDs. 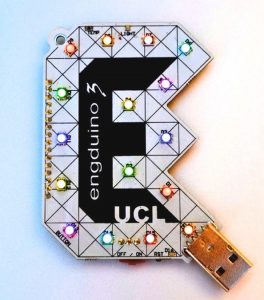 For more information about the engduino please click here

Inspired by the Victoria & Albert Museum’s exhibition Engineering The World, CDT-ACM students were invited to develop education resources to be used by secondary school teachers during their visit to the exhibition and as supporting follow-up material in schools. The exhibition was part of the V&A’s engineering season and focussed on the work of Ove Arup, his life, philosophy, achievements and legacy. Students worked together with the curatorial and education departments to develop an understanding of the exhibit and its context in the wider museum, and to gain an understanding of the types of visit/activities and approaches typically utilised. The students then worked in pairs to develop ideas and worksheet activities.

The resource pack has been very popular and so far has been downloaded over 500 times, The CDT students very much enjoyed taking part in the project, and it is hoped that further collaborations will take place in the future.

To find out more about the exhibition and to see the resources created by the students, please click here 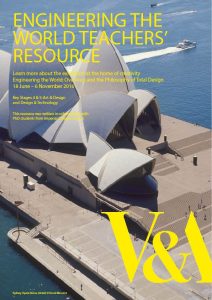